Family and Food Come Together at Bangkok Noi Thai

Thai food and Gloucester Village? At first Tusnee McDaniel wasn’t sure a Thai restaurant would fit into a traditional Main Street that looks like a page from Norman Rockwell’s America.

Just before the doors to Bangkok Noi Thai opened in 2008, McDaniel saw a crowd gathering.

“Where are all those people going?” she wondered.

They were customers headed in to try authentic Thai — recipes McDaniel’s grandmother and mother had passed down, cooked to perfection with the freshest local seafood and locally grown vegetables.

“They had to be patient; I didn’t know how we were going to keep up at first,” McDaniel says.

Thirteen years later, Bangkok Noi Thai is considered a local gem that has carved out a niche all its own just like neighboring favorites Lulu Birds Kitchen and Olivia’s in the Village. 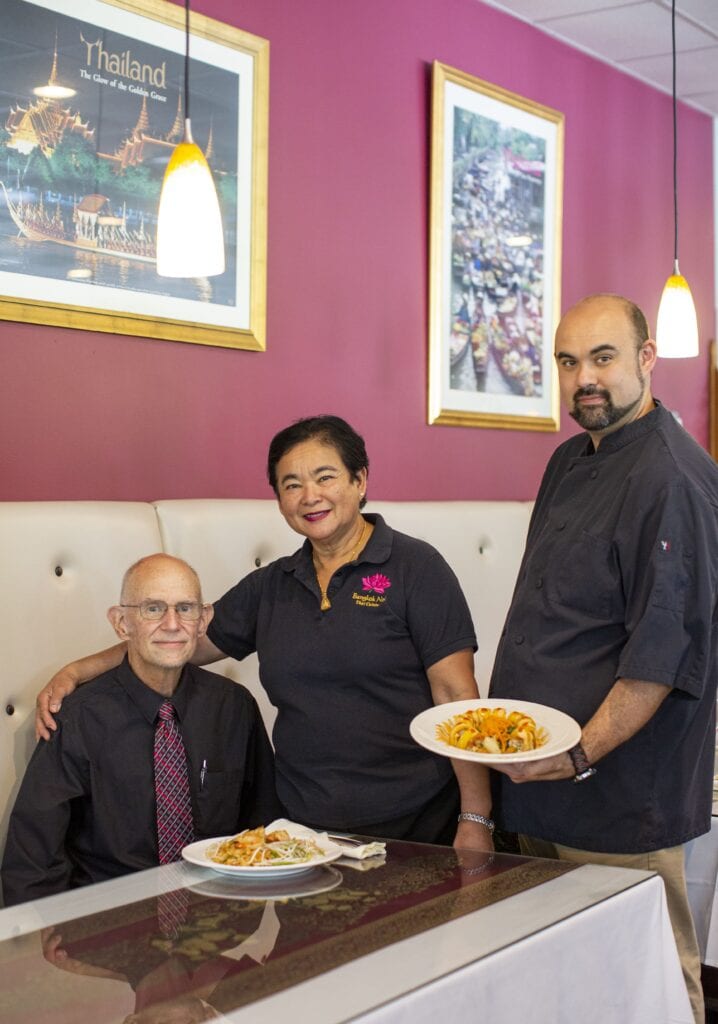 The food is special with McDaniel overseeing all the details — a lifetime of culinary wisdom that stems from growing up in Old-world Bangkok Noi, Thailand, where helping in the kitchen was a daily part of her life.

Her mother loved to create new recipes; a pot of rice was always brewing on the stove. The menu reflects that same creativity that inspired her mother, who regularly added fresh tomatoes to her friend rice and pineapple to her Pad Khing, a tradition McDaniel continues,

McDaniel left Thailand as the wife of an Air Force serviceman, Kerry McDaniel. They would live in California before settling in Gloucester, where the idea of opening a mom and pop carryout intrigued her. She didn’t intend to start from scratch when she purchased the half acre of land that housed an old Esso gas station, but termite damage left demolition as the only viable option, which created a fresh vision.

Bangkok Noi is a full-serve restaurant where the warmth of the staff — many of them extended family — matches the authentic Thai that kept the restaurant bustling even during the pandemic. Initially, some locals weren’t familiar with Thai, thinking it was another version of Chinese food.

Thai cuisine tends to rely on more herbs than Chinese and is often hot and spicy, though Bangkok Noi can alter those levels to taste.

Seafood is often a key ingredient, and Bangkok Noi uses the bounty from the nearby Chesapeake Bay in many of its dishes, including Shrimp Mussamun with Avocado, Soft Shell Crab with your choice of two sauces and Seafood Paradise, a combination of fish in a panang curry sauce.

Unlike Chinese, duck plays a major role on the menu and can be incorporated into multiple dishes. The Sushi on Main offerings would satisfy any appetite; four Chef Special Samplers pair four different rolls together. Meat lovers will get their fill and more on Tomahawk night, the first Friday and Saturday of every month.

The ribeye beef steaks with the extra-long rib bones overwhelm the plate. “I don’t know how anyone eats it all,” McDaniel says. 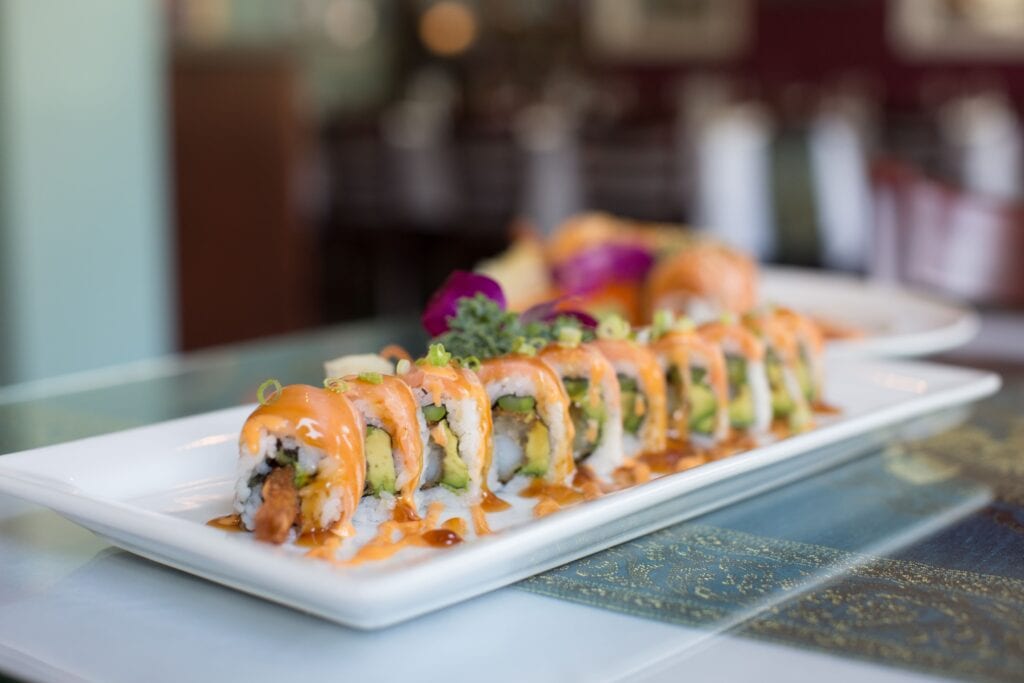 The brick-front restaurant has its own parking lot and a patio that is pet friendly. Local musicians add to the festive mood on weekend nights.

Andrew McDaniel is general manager of the restaurant; he’s enjoyed the food business since he started at Papa Johns as a 16-year-old. (His brother, Anthony, owns his own place, Chao Pyraya Thai and Sushi Grill in Kilmarnok — named for the Thai river where both boys swam during visits to family in Thailand).

“I love that I get the opportunity to express my feelings in food,” Andrew says. “I’m learning all her sauces. I’m happy when she’s impressed!”

As good as the fare is, the McDaniels want their guests to enjoy their entire dining experience — among the reason they refuse to cut corners. “We do things right,” Tusnee says, who asks diners to be patient when dishes take extra time to cook. Everything is made to order.

“We’re McDaniels not McDonalds!” she notes.

It’s not unusual for them to welcome diners return multiple days in a row; Tusnee loves to recommend they try a new dish. “You can’t eat Pad Thai every day,” she says of the restaurant’s most popular seller.

The McDaniels are no longer newcomers in Gloucester Village; it’s now home. Kerry has since retired and enjoys helping out around the restaurant; he built the outdoor fence in a day. Andrew’s wife, Amber, also works there.

“I recently bought a house here; we walk to work,” he says, adding, “Our customers are our family. Food is life, but you don’t come here just for the food. You come here for the experience.”

It’s always a special one. 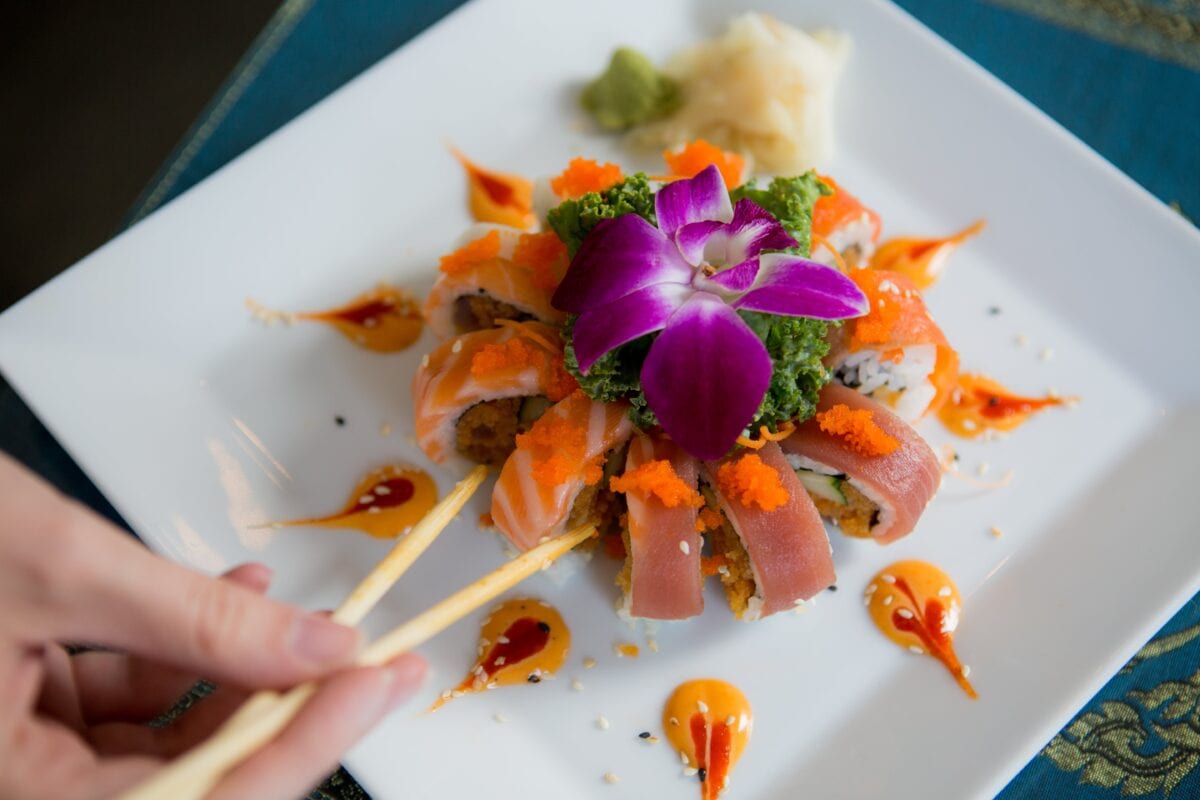