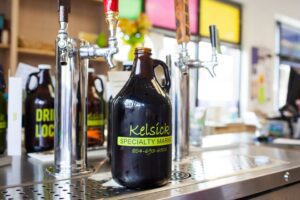 Both businesses received their award at the association’s annual Retailer of the Year celebration held May 30 in Chesapeake.

Now in its 12th year, the Retailer of the Year awards ceremony was created to recognize retail excellence in product quality, customer service and community involvement. More than 140 nominations were received for this year’s awards, which honor the best retail, service and restaurant businesses in the region.

In bestowing the Retailer of the Year award, a panel of independent judges gave Kelsick Specialty Market high marks for customer service and visual merchandising, inviting aesthetics, product knowledge, cleanliness and neatness of store and signage, among other criteria.

Kelsick serves the Middle Peninsula and Northern Neck community with natural, organic and homemade foods, fine wine, and craft beer for nearly three decades under the ownership of Beth Haskell. In March, Haskell announced her retirement and the sale of the business to Yorktown-native Paige Drewry, whose passion for food service, culinary arts, business and wine made her a natural fit to lead Kelsick into the future.

“Under past and present leadership, Kelsick Specialty Market has become a flagship retail destination on Gloucester Main Street,” said Jenny Crittenden, Executive Director of the Gloucester Main Street Preservation Trust. “We are extremely proud of both Kelsick and Smith’s Florist and Gift Shoppe for their Retail Alliance awards, along with the other thriving Gloucester businesses who were in the running for accolades as well.”

The Retail Alliance has been serving the interests of local retailers in Hampton Roads since 1903. It promotes and supports the healthy growth of retail businesses and trade through signature programs such as its STRIVE educational workshops, Center for Retail Excellence education, Virginia Retail Federation legislative lobbying and industry advocacy. It also manages the LOVEVA Buy Local rewards program and many other discounts and member benefits.

For more information on the Retail Alliance, visit retailalliance.com.

We use cookies to ensure that we give you the best experience on our website. If you continue to use this site we will assume that you are happy with it.Ok