Good Brews for all at Gloucester Village Microbrewery

Gloucester Brewing Company started in a garage unless you believe it was destined since birth.

Mike Brewer is one of two founders after all.

“Pure coincidence,” he says about his last name.

Despite his name, Brewer knew nothing about brewing beer. He did know that he and his wife, Laura, and their friends Myron Ware and his wife, Liz, liked going to microbreweries. It wasn’t just for the craft beer.

“People are friendly and relaxed; they’re really nice places to hang out,” he says.

At the time, Gloucester didn’t have a microbrewery. The building that now houses Gloucester Brewing was vacant and owned by Southern States. Every time the Brewers drove past the building in Edgehill Shopping Center, Mike would casually mention to his wife, Laura, its ideal location for a microbrewery.

But Ware was a home brewer. The pair experimented in his garage and decided to partner together for the venture without giving up their day jobs. Their wives pitch in on a regular basis, too.

Mike and Laura Brewer and Myron Ware all work for NASA in supervisory roles. Liz Ware is a wealth advisor at TowneBank. Holding down a day job and running a microbrewery present a challenge for all of them, but the reward comes when they visit GloBrew and meet their patrons.

“We like seeing people there, enjoying themselves, having fun and telling us how glad they are that Gloucester County has a brewery,” Mike Brewer says.

They lease the building from Southern States, which previously ran a small engine repair shop there. Before that, it was a building materials company.

“When we cleaned it out, we found receipts in the attic from the 1930s,” Brewer said. “It’s a beautiful old building.”

Gloucester Brewing Company was formed in December 2016. The following year, the men developed the recipes in Brewer’s garage while they worked on the demolition of the buildout. GloBrew is all of about 2,000 square feet of space — large enough to house a seven-barrel brew house and three fermenters, a walk-in cooler and cozy taproom.

Keeping the essence of the building was important. Signs from Southern Repair remain in the wall.

“We’ve got signs for battery sales and wood shelving in the back with index cards that have tire sizes on them,” he says.

They repurposed the wood they found in the attic to cover the sides of the bathrooms and used a large portion of it for their bar top. They tore down drywall but left the exposed brick.

“It’s gorgeous old wood,” Brewer says. “We used our local blacksmith to put some metal details around it. The goal was to leave it as original as possible. You can tell it’s an old building. It doesn’t look new. It’s nice and warm.”

When it came down to the actual beer, they wanted to provide a range of flavors so that every customer could find something to enjoy. They were conscious to make sure all their brews weren’t IPA-heavy. The core beers include one IPA, a pale ale, a cream ale, a red ale and a brown ale.

The aromatic IPA known as Hills Bay, is named after a body of water in Mathew County. The red ale, Rosewell, refers to the historic Rosewell Ruins; the Low Ground beer refers to a road between Glass and Guinea in Gloucester County. Shucking Good is an ode to the watermen in the region. Ordinary, named for the unincorporated community in Gloucester County, appeals to those who favor a lighter brew.

“We try to name the beers to reflect Gloucester,” he says.

GloBrewCo transitioned to to-go sales during the pandemic. They’ve made better use of their outdoor space to serve folks. Music groups offer weekend entertainment periodically. During the winter, they relied on heaters and tenting to keep customers warm.

GloBrewCo is considering distribution; currently they make 350 barrels a year but do not distribute. They are in search of a larger space that would be for brewing only.

The newest brewer in the family is Brewer’s son, also named Mike, carries the major load of brewing and is close to becoming a professional brewer. He grew weary of his job in Northern Virginia and returned home initially to help his father in the taproom, but became enchanted by the brewing side of the business.

Both families embrace their roots in Gloucester Village, a location they’re passionate about for its walkability and friendliness.

“The Main Street Association and the Preservation Trust have been great supporters and great advocates of us and for us,” Brewer said.

Stop by and have a brew! 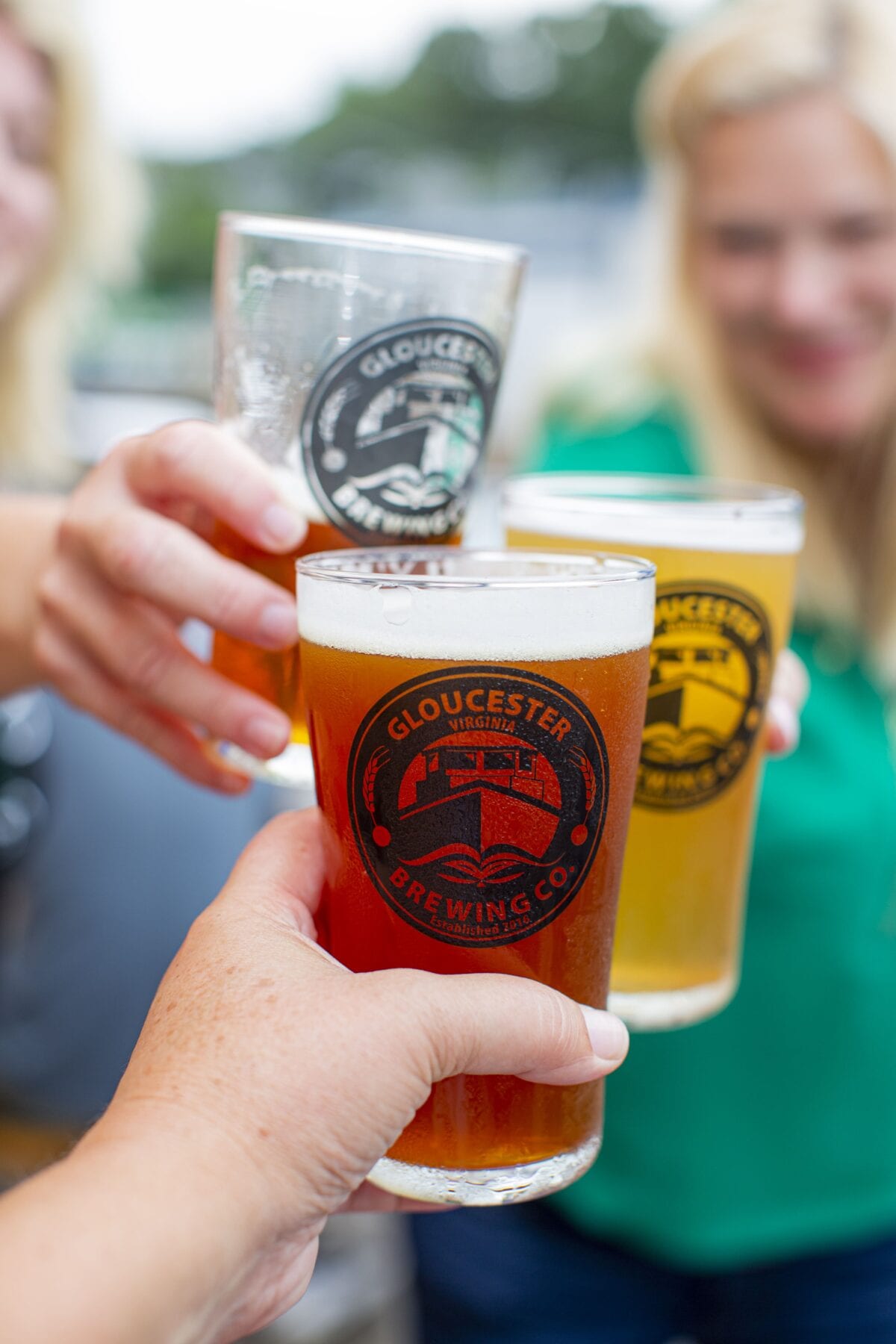