The large white washed wall of the stone building next to the old Texaco station on Gloucester Main Street will transform from its current state as a blank canvas and into a mural honoring and celebrating the life and legacy of T.C. Walker, The Cook Foundation announced this week.

The mural, commissioned by The Cook Foundation in 2019, is expected to take two months to complete by artist Michael Rosato, who started work on the wall Tuesday, Sept. 1, 2020. It will become the fourth mural on Main Street when completed.

Rosato specializes in designing and painting large-scale murals for public and private spaces. His work can be seen in venues across the country, including the Oklahoma City National Memorial, Smithsonian Museum of Natural History in Washington, DC, the Headquarters of Bacardi in San Juan, Puerto Rico, the U.S. Fish and Wildlife Museum in Cape Charles, and the Virginia Military Institute.

The T.C. Walker mural started as a sketch in his studio in Maryland, Rosato said.

“It’s the life story of T.C. Walker and starts when he was a boy, a child, until he reaches his later years,” said Rosato. “It’s a remarkable story. My goal with the mural is to get you to really know, on a more in-depth level, all the things that made T.C. Walker, T.C. Walker.”

Known as Virginia’s “Black Governor,” Thomas Calhoun (T.C.) Walker was a teacher, lawyer, and government official. Born a slave less than a year before President Abraham Lincoln signed the Emancipation Proclamation, Walker grew up to become the first African American to practice law in Gloucester County.

When Walker was 10-years-old, in between working odd jobs to support his family, he began requesting to get an education. His father told him he was too old to learn. When he was 13, a Sunday school teacher gave him a spelling book so he could learn to read and write. With 92 cents in his pocket, he made his way to Hampton Institute, now Hampton University, in search of a higher education.

Even though he could not pass the entrance exam and was denied admission, Walker persuaded the school’s founder to make an exception. He was allowed admission as long as he did work on campus during the day and attended classes at night.

Walker went on to practice law.

In 1891, he was elected to the Gloucester County Board of Supervisors and in 1934 President Roosevelt appointed Walker as the advisor and consultant of Negro affairs for the Virginia Emergency Relief Administration. That was the appointment that earned him the nickname “Black Governor” of Virginia.

A lifelong learner and lover of education, Walker also became a superintendent for Gloucester Negro Schools and known for donating money to help build schools for African Americans in the county.

“I will tell his story with a lot of pride and a lot of integrity,” said Rosato. “It’s important to the community and his legacy.”

Watch Rosato at work over the next two months. He is expected to be working on the mural from sun up until sun down until it’s completed.

ABOUT THE COOK FOUNDATION

The Cook Foundation is a non-profit, privately funded organization whose mission is to nurture and sponsor the arts in Gloucester, Virginia. With a small board, it functions as a philanthropic community-based organization that responds to the artistic dreams and needs of the community it serves. The Foundation creates innovative arts events, supports arts education and raises art awareness through programs in order to enhance the quality of life of Gloucester residents and encourage pride in the community. Learn more about The Cook Foundation at thecookfoundation.org.

Consociate Media for The Cook Foundation 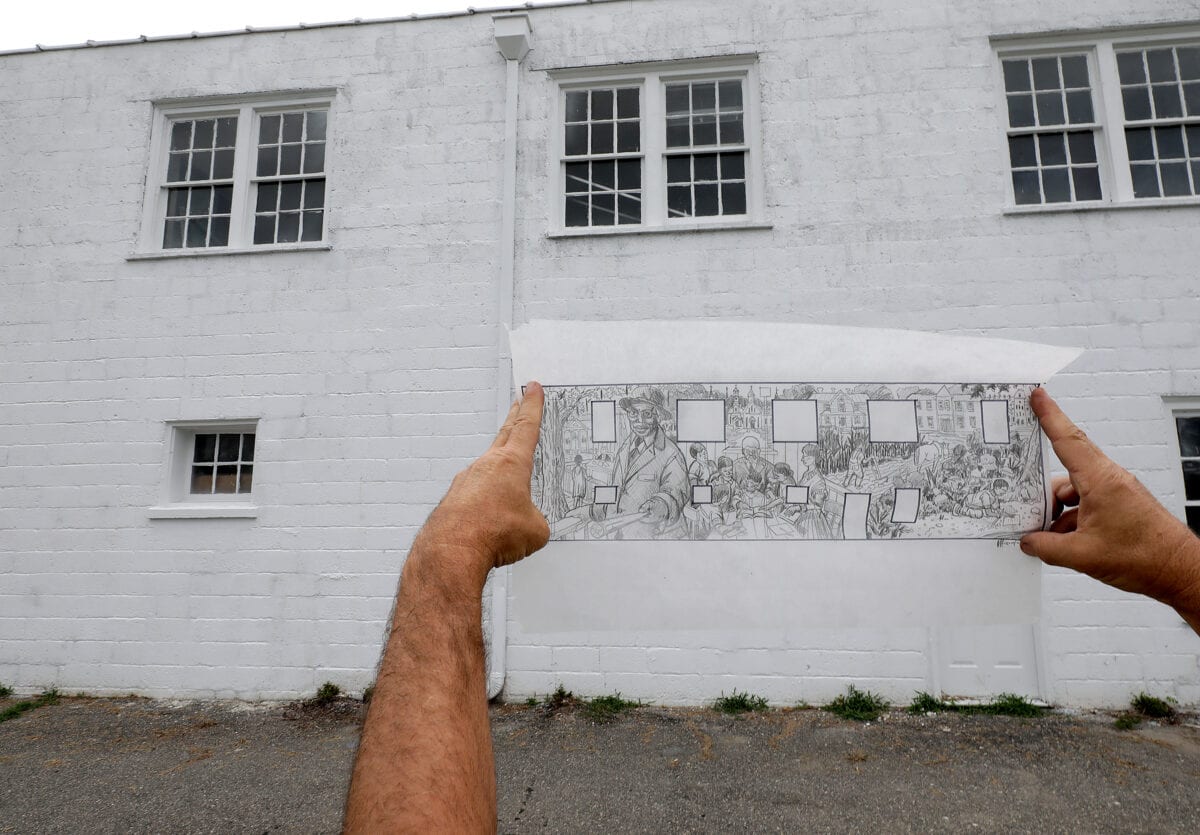